Blog
You are here: Home / Blog / Estate Planning / Exceptions and Bars to Inheritance

Baron Law LLC, Cleveland, Ohio, offers information for you to reflect upon while you are setting out looking for an estate planning attorney to help protect as much of your assets as you can. For more comprehensive information contact Baron Law Cleveland to draft your comprehensive estate plan to endeavor to keep more of your assets for your heirs and not hand them over to the government by way of taxes.

When someone dies intestate (without a will), there are several exceptions to the rules of descent and estate distribution which act to bar a person from receiving what would have been such person’s intestate share of the decedent’s estate. These rules and exceptions highlight the importance of having a comprehensive estate plan and, in certain circumstances, are of paramount importance to heirs and beneficiaries. Rules are only written when they are needed, and the context surrounding these rules and exceptions illustrate some of the more extreme problems that an estate administration may potentially face. As always, an experienced Ohio estate planning attorney can fill you in on all the details and make a plan that will deal with any issues proactively.

The most commonly known exception is the slayer statute which is codified under Ohio Revised Code § 2105.19. This statute deals with the crimes of aggravated murder, murder, voluntary manslaughter, and/or complicity in the violation of any of the above crimes. If one has pled guilty to, has been convicted of, or has been found not guilty by reason of mental defect of, any one of the above crimes, such person is barred from receiving any portion of his or her victim’s estate. This statute bars inheritance regardless of whether it would have been through intestacy or as a bequest under a will. The same also applies to other property received as a result of death, like insurance proceeds. The slayer statute is an attempt by the Ohio legislature to write into law the cliché that crime doesn’t pay.

Under common law, children born out of wedlock were not entitled to inherit from their mother or father. O.R.C. § 2105.17 states, however, that children born out of wedlock shall be capable of inheriting or transmitting inheritance from and to their mother and from and to those from whom she may inherit, or to whom she may transmit inheritance, as if born in lawful wedlock.

Ohio’s intestacy statute does not specifically address the ability of children born out of wedlock to inherit from their father. This issue, however, has been addressed in Ohio case law. Such case law has established multiple ways in which a child born out of wedlock could inherit from such a child’s father, some of the ways include the child’s father: 1) marrying the child’s mother, 2) providing for the child in a will, 3) designating the child as an heir, or 4) adopting the child.

The enactment of the Ohio Parentage Act, codified via O.R.C. § 3111, provided an additional way for a parent-child relationship to be established by allowing a child to bring an action to determine parentage. There has been disagreement among Ohio courts as to whether such actions to determine parentage must be brought prior to the father’s death. Some courts have held that while O.R.C § 2105.06 “does not require a parentage action to be brought before the death of the father… a probate court does not have jurisdiction to hear a parentage action under O.R.C. Chapter 3111.” See Estate of Hicks, 629 N.E.2d 1086 for more information. This likely creates a necessity to bring any parentage action by any estranged child as soon as possible in order to prevent being automatically disinherited by virtue of a lack of probate court jurisdiction. Contact a local Cleveland estate attorney to make sure your inheritance rights are valid and, if not, the appropriate steps are undertaken to validate and protect them.

Children Conceived as a Result of Rape

Recently in 2015, the Ohio legislature recently passed law that prevents a person who commits rape or sexual battery, or any of such person’s relatives, from receiving an intestate share from a child, or child’s decedents, who was conceived as a result of the rape. Such is codified via O.R.C § 2105.062.

Children who are abandoned by parents

If a minor child has been “abandoned” by a parent, then the parent is prevented from receiving an intestate share of the deceased minor’s estate. O.R.C. 2105.10(B). A child is “abandoned” by a parent if the parent has failed, without justifiable cause, to communicate with the minor, care for the minor, and provide support as required by law for at least a year immediately prior to the minor’s death. O.R.C. 2105.10 (A)(1). While few minors die with significant assets, this statute may be significant in the event of a wrongful death of the minor in which a significant windfall due in insurance proceeds or litigation may be contemplated. This potential windfall is a major reason why estate planning, even for individuals relatively young, should not be overlooked. The last thing a grieving family wants to do, while also negotiating a legal settlement, is deal with internal family disputes over who has authority over the decedent child’s estate, and along with it, the authority to negotiate the settlement amount for legal claims. Contact a local estate attorney to prevent this from happening.

Once a child has been adopted and after the final order of adoption is issued, the adopted child’s relationship with the natural/birth family, except the natural parent in the case of a step-parent adoption, is legally terminated. This eliminates any rights such child had to inherit from the natural family under the laws of descent and distribution. Instead, the adopted child, if that child is adopted prior to age 18, is treated as a child of the adoptive parent for purposes of intestate succession law and entitled to all the rights and privileges inherent to being a natural child.

These rules and exceptions to inheritance only touch on the multitude of problems and issues that face families when planning an estate or administrating an estate after death. Death is something no one likes to think about and even less people plan for. Just a few hours, however, with an experienced Cleveland land estate planning attorney can save your family months of stress and thousands of dollars in legal fees and court costs.

You don’t have to be rich to protect what you’ve spent a lifetime trying to build. To find out whether a trust is right for your family, take the one-minute questionnaire at www.DoIneedaTrust.com. There are a number of different trusts available and the choices are infinite. With every scenario, careful consideration of every trust planning strategy should be considered for the maximum asset protection and tax savings. For more information, you can contact Mike Benjamin of Baron Law LLC at 216-573-3723. Baron Law LLC is a Cleveland, Ohio area law firm focusing on estate planning and elder law. Mike can also be reached at mike@baronlawcleveland.com.

The information contained herein is general in nature, is provided for informational and educational purposes only, and should not be construed as legal or tax advice. The author nor Baron Law LLC cannot and does not guarantee that such information is accurate, complete, or timely. Laws of a particular state or laws that may be applicable in a given situation may impact the applicability, accuracy, or completeness of the preceding information. Further, federal and state laws and regulations are complex and subject to change. Changes in such laws often have material impact on estate planning and tax forecasts. As such, the author and Baron Law LLC make no warranties regarding the herein information or any results arising from its use. Furthermore, the author and Baron Law LLC disclaim any liability arising out of your use of, or any financial position taken in reliance on, such information. As always consult an attorney regarding your specific legal or tax situation. 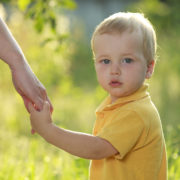 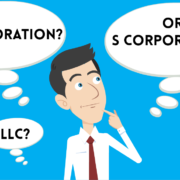 I’m Thinking Of Incorporating My Business, What Is An S Corporation? 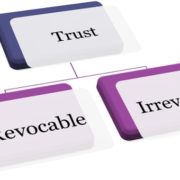 What is an Irrevocable Trust? 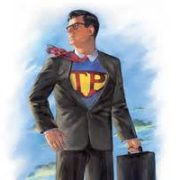 What is a Trust Protector?

Are Your Parents in a Nursing Home? Here Are Ways to Prevent Medicaid Estate Recovery 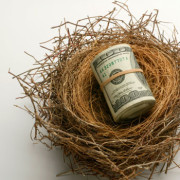 How Does a Minimum Required Distribution Affect My Retirement? 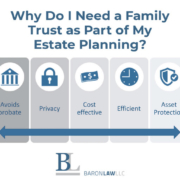 Why Do I Need a Family Trust as Part of My Estate Planning? 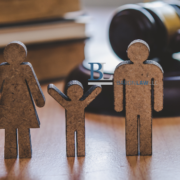 Guardianship and Your Estate Planning

A Trustee Isn’t Paying Me, What Can I Do?

My Trustee Isn’t Very Good At Their Job, Can I Get Rid Of Them?
Scroll to top